Whether you are talking Oracle RAC,  Oracle ExaData, MySQL, SQL Server, DB2, Teradata or Application Servers, it's really all about the data.  Companies are constantly striving to make faster business decisions with higher degrees of accuracy.  Traditional systems such as Oracle, SQL Server, IBM, Teradata, etc. are scaling their systems to store hundreds of terabytes and even petabytes, with hardware that keeps getting faster and faster.   However these traditional systems were designed for transaction systems and have a lot of difficulties working with big data.   I'm going to talk to you about why these traditional systems are not designed for big data and we're going to talk about how Hadoop is the right technology at the right time to address Big Data.

What's The Deal About Big Data 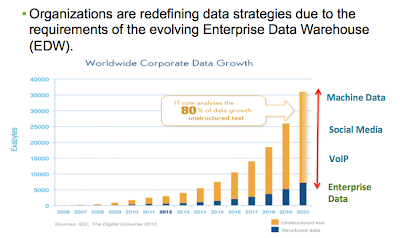 Data becomes big data when the volume, velocity, and/or variety of data gets to the point where it is too difficult or too expensive for traditional systems to handle.  Big data is not when when the data reaches a certain volume velocity of data ingestion or type of data.  Big data is when traditional systems are no longer viable solutions due to the volume, velocity and/or variety of data.   A good first book on big data to read is Disruptive Possibilities.

The reason traditional systems have a problem with big data is they were not designed for big data.
Successfully leveraging big data is transforming how organizations are analyzing data and making business decisions.  The "value" of the results of big data has most companies racing to build Hadoop solutions to do data analysis.  The diagram below show how significant big data is.  Often customers bring in Hortonworks and say, we need you to make sure we "out Hadoop" our competitors.  Hadoop is not just a transformation technology it's the strategic difference between success and failure. 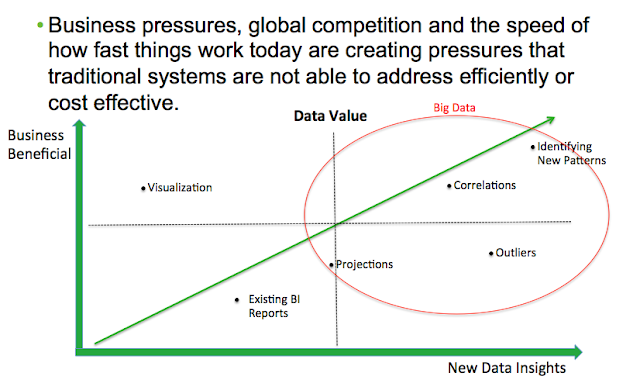 Examples of New Types of Data

Hadoop is being used by every type of organization ranging from Internet companies, Telecommunication firms, Banks, Credit Card companies, gaming companies, on-line retail companies,etc.  Anyone that needs to analyze data is moving to Hadoop. Here are examples of data being processed by organizations. 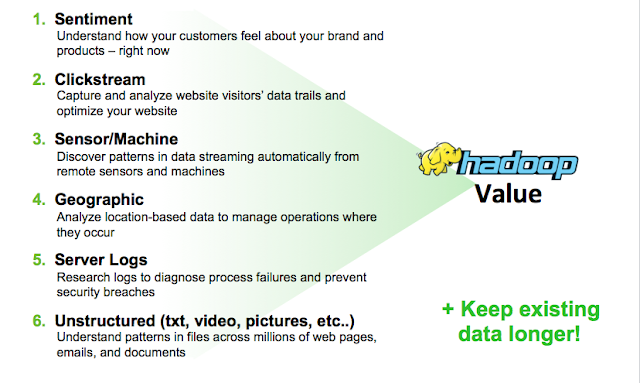 
A Hadoop distribution is made up of a number of different open source frameworks.  An organization can build their own distribution from the different versions of each framework.  Anyone running a production system needs an enterprise version of a distribution.  Since Hortonworks has key committers and project leaders on the different open source framework projects, we use our expertise to pick the latest version of a framework that works reliably with the other frameworks.  Hortonworks then goes out and tests a distribution and builds an enterprise distribution of Hadoop.  For example, Hadoop 2 went GA the week of  October 15th, 2013.  Hadoop 2 has been running on Hadoop clusters with thousands of nodes since January of 2013, being tested by the large set of Hortonworks partners.

There are a number of different Hadoop distributions.   Some of the distributions have been around longer than Hortonworks.  In my expert opinion, the reason to choose Hortonworks is: 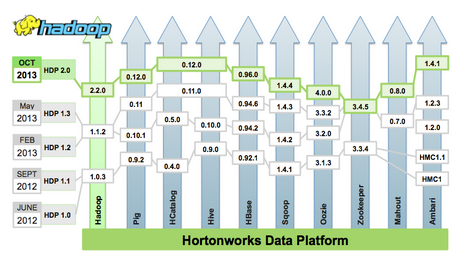 The two main frameworks of Hadoop are the Hadoop Distributed File System (HDFS) which provides the storage and I/O and YARN with is a distributed parallel processing framework.

YARN
YARN (Yet Another Resource Negotiator) is the foundation for parallel processing in Hadoop.  YARN is:

HDFS 2
HDFS uses NameNodes (master servers) and DataNodes (slave servers) to provide the I/O for Hadoop.  The NameNodes manage the meta data. NameNodes can be federated (multiples) for scalability.  Each NameNode can have a standby NameNode for failover (active-passive).  All the user data is stored on the DataNodes.  Data is distributed across all the disks in 128MB - 1GB block sizes. The data has 3 replicas (default) for high availability.  HDFS provides a solution similar to striping and mirroring using local disks. 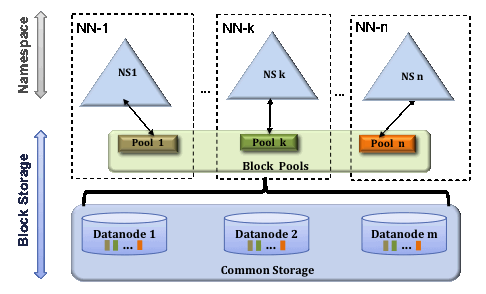 Additional Frameworks
Here is a summary of some of the key frameworks that make up HDP 2.


Hadoop is a solution that leverages commodity hardware to build a high performance super computing environment.  Hadoop contains master nodes and data nodes.  HDFS is the distributed file system that provides high availability and high performance.    HDFS is made up of a number of data nodes that break a file into multiple blocks. The block sizes are usually in 128MB - 1GB in size.  Each block is replicated for high availability.   YARN is a distributed processing architecture than can distribute the work load across the data nodes in a Hadoop cluster.  People new to Hadoop do not realize the massive amount of IOPS that commodity X86 servers can generate with local disks.

In the diagram below:
HDFS - distributes data blocks across all the local disks in a cluster.  This allows the cluster to leverage the IOPS that local disks can generate across all the local servers.  When a process needs to run, the programs are distributed in parallel across all the data nodes to create an extremely high performance parallel environment.   Without looking into the details, the main point is this is a super computer environment that can leverage parallelization for processing and leverage the massive amounts of IOPS that local disks can generate running across multiple data nodes as a distributed file system.  The diagram shows multiple parallel processes running across a large volume of local disks running as a single distributed file system. 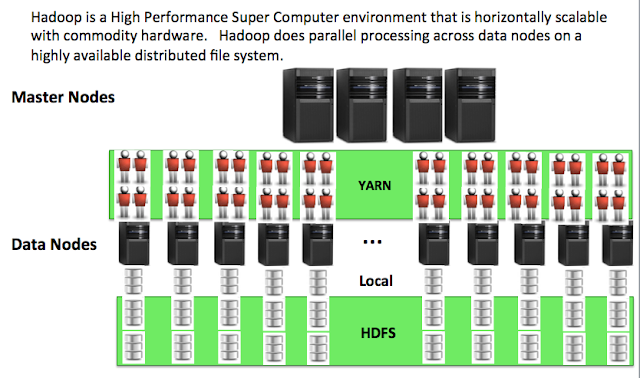 Hadoop is not replacing anything.  Hadoop has become another component in an organizations enterprise data platform.  This diagram shows that Hadoop (Big Data Refinery) can ingest data from all types of different sources.  Hadoop then interacts and has data flows with traditional systems that provide transactions and interactions (relational databases) and business intelligence and analytic systems (data warehouses). 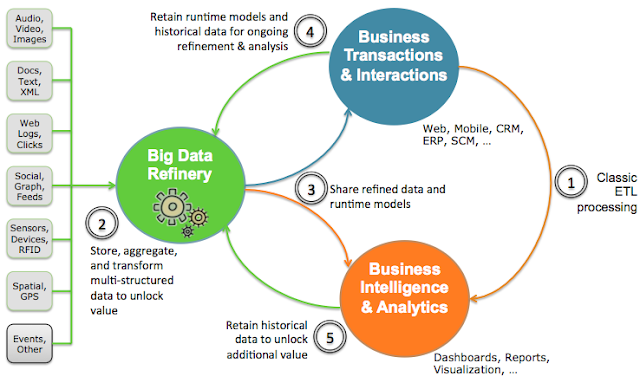 Email ThisBlogThis!Share to TwitterShare to FacebookShare to Pinterest
Labels: Hadoop